I begin with the picture above rather than a picture of Mary Somerville herself because it was the natural world surrounding her in her home of Burntisland on the eastern coast of Scotland, just north of the Firth of Forth, that was her first inspiration.  According to her biography, which was written by her daughter but largely using her own words from journals and letters:

" .  .  .  as a lonely child, she wandered by the seashore, and on the links of Burntisland, collecting shells and flowers; or spent the clear, cold nights at her window, watching the starlit heavens, whose mysteries she was destined one day to penetrate in all their profound and sublime laws, making clear to others that knowledge which she herself had acquired, at the cost of so hard a struggle."


And here is Mary's house from which she looked through her window at the stars at night:


As you can see in the plaque above the door, Mary's father was a naval officer.  He was away at sea when she was born, so Mary was born in Jedburgh, at the home of an aunt and uncle, rather than here in Burntisland.  Later her father became a vice-admiral.

The plaque says that she was a well-known mathematician and astronomer, and she certainly was in her day.  One of the things that she did was to translate Pierre-Simon, Marquis de Laplace's work Méchanique céleste. He later told her that of all women only she and Caroline Herschel understood his work.  She received a letter from renowned Cambridge mathematician George Peacock that he and Dr. William Whewell had chosen her translation to be used

"Dr. Whewell and myself have already taken steps to introduce it into the course of our studies at Cambridge, and I have little doubt that it will immediately become an essential work to those of our students who aspire to the highest places in our examinations  .  .  ."

She wrote other books as well.  She was particularly interested in analysis and wrote a book on curves and surfaces of the second and higher orders and also wrote a book titled, Physical Sciences.  She had the honor of presenting her Physical Sciences to the Duchess of Kent, who was the mother of Queen Victoria, of this she writes:

"I had the honour of presenting a copy of my book to the Duchess of Kent at a private audience. The Duchess and Princess Victoria were alone, and received me very graciously, and conversed for half an hour with me. As I mentioned before, I saw the young Princess crowned: youthful, almost child-like as she was, she went through the imposing ceremony with all the dignity of a Queen."

So Mary Somerville certainly reached to the heights, but the beginnings were not so easy for her.  So let's go back to the beginning  .  .  .

Her birthplace was the Jedburgh Manse, home of her uncle The Reverend Dr. Thomas Somerville (1741-1830), whose grave in the south choir chapel of the ruins of Jedburgh Abbey is shown below. 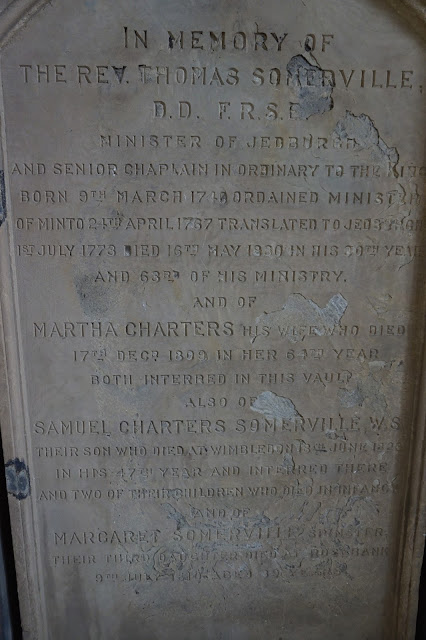 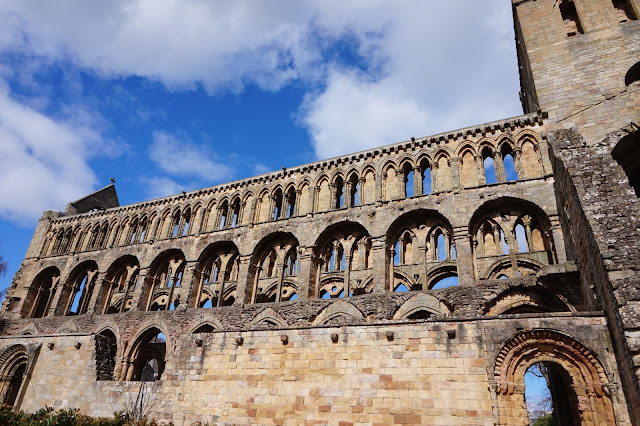 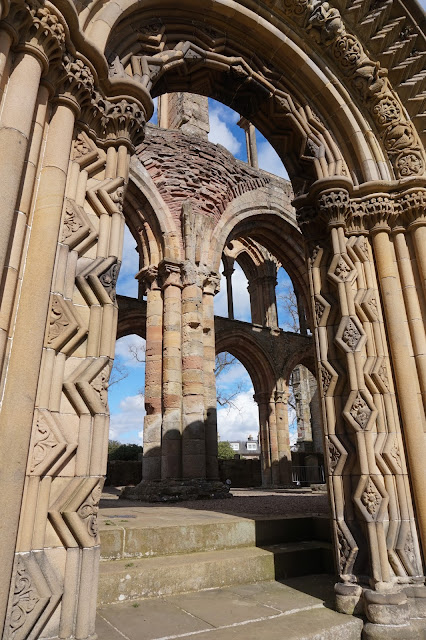 While preparing for these travels I spent a great deal of time reading about Mary Somerville's life and work.  She came from a well-respected though not wealthy or noble family.  Her father's family, the Fairfaxes, were distinguished, and her mother was related to several prominent Scottish families.  When I read she'd been born in the Manse of Jedburgh, I took that to be a manor house or mansion.  I knew the manse to have been entirely ruined, but I hoped to find something marking the spot on my travels.  I asked about it at the visitor information building in Jedburgh, but no one there knew. And then I came across the following: 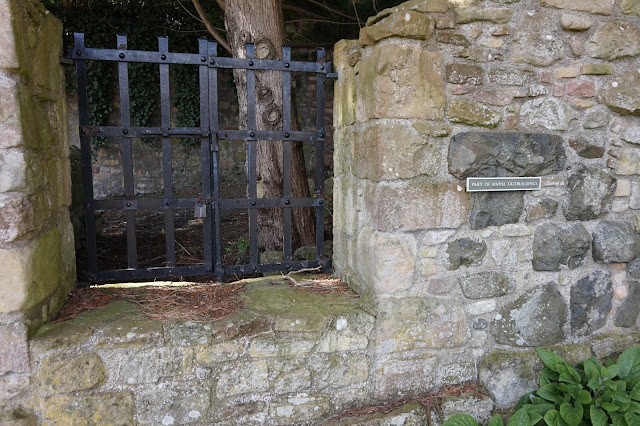 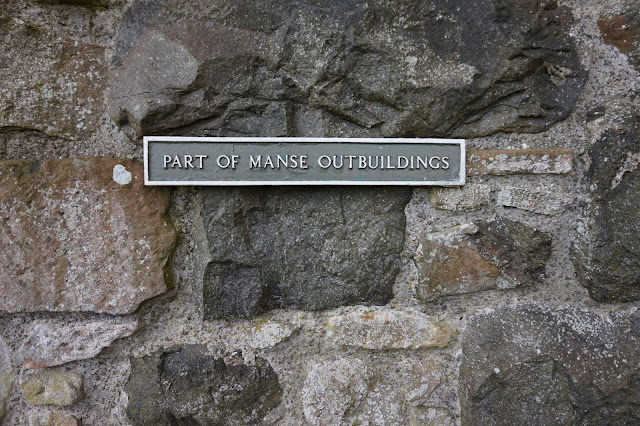 This was an exciting moment for me!  Looking it up later I found that a manse is the home of a Presbyterian minister.  The manse would have been on the grassy area in the picture below - right by the ruins.  It would probably have extended into the foreground as well.  The remaining houses in this area were demolished in 1974 in order for archaeological studies of the ruins to take place.

Here is what Mary has to say of the Manse, and of time spent in Jedburgh with her relatives:

"My uncle's house—the manse—in which I was born, stands in a pretty garden, bounded by the fine ancient abbey, which, though partially ruined, still serves as the parish kirk. The garden produced abundance of common flowers, vegetables, and fruit. Some of the plum and pear trees were very old, and were said to have been planted by the monks  .  .  .  . An inland scene was new to me, and I was never tired of admiring the tree-crowned scaurs or precipices, where the rich glow of the red sandstone harmonized so well with the autumnal tints of the foliage.  We often bathed in the pure stream of the Jed. My aunt always went with us, and was the merriest of the party; we bathed in a pool which was deep under the high scaur, but sloped gradually from the grassy bank on the other side.  .  .  . The evenings were cheerful; my aunt sang Scotch songs prettily, and told us stories and legends about Jedburgh, which had been a royal residence in the olden time. She had a tame white and tawny-coloured owl, which we fed every night, and sometimes brought into the drawing-room  .  .  .  . I was always glad to return to the manse."

Here is the Jed or "Jed Water" of which she speaks.  It is directly below the abbey.

There is just so much to say about her life and her work, and this has gotten so long already.  I'll close with some words of what I find most interesting about her, but I need to direct you to her biography for more (biography, autobiography).

So far nothing has been said of her struggle, and it was a struggle for ANY woman born in 1780 who wanted to study mathematics.  Her initial interest in the sciences came from her own observations of the natural world - the beach near her home and the stars outside her window.  Later, while at a friend's house, she was shown a women's fashion magazine with color plates in it; also in it she found a math puzzle that had x's and y's in it.  When she asked what those were, her friend, Miss Ogilvie, said, "Oh, it is a kind of arithmetic: they call it Algebra; but I can tell you nothing about it."  Mary remembers going home and looking through all the books to see if they could tell her what was meant by Algebra.

Another draw to mathematics came when she was taking art lessons from the well-known Scottish painter Alexander Nasmyth.  Nasmyth was primarily a landscape painter, but he is probably best known for his portrait of his friend, and national Scottish hero, the poet Robert Burns.

The inspiration she received from Nasmyth happened in the form of an overheard conversation - again, in her own words:

"One day I happened to be near him while he was talking to the Ladies Douglas about perspective. He said, "You should study Euclid's Elements of Geometry; the foundation not only of perspective, but of astronomy and all mechanical science." Here, in the most unexpected manner, I got the information I wanted, for I at once saw that it would help me to understand some parts of Robertson's "Navigation;" but as to going to a bookseller and asking for Euclid the
[Pg 49] thing was impossible! Besides I did not yet know anything definite about Algebra, so no more could be done at that time; but I never lost sight of an object which had interested me from the first."

By impossible she meant that a woman could not go to a bookseller and purchase mathematics books for herself.  She did study what she could at home - asking questions of her brother's tutor and picking up what she could from him.  Her parents discouraged her, and she had enough household chores to keep her busy until night-time, so she took to studying in her room by candle-light.  When her mother heard of this she instructed the servants to take Mary's candles way.  Mary continued to find ways to study, which concerned her father so much that he exclaimed to her mother, "Peg, we must put a stop to this, or we shall have Mary in a strait jacket one of these days. There was X., who went raving mad about the longitude!"

Mary had to fight against familial and cultural stereotypes against women studying mathematics.  Women were expected to be "accomplished" - able to stitch and sketch, play pianoforte and perhaps speak another modern language - but studying mathematics was thought to be so mentally strenuous for a woman that she could go crazy.  When she married, her husband also did not encourage her studies, but her first husband died a couple of years after their marriage.  After his death, her inheritance gave her more freedom to pursue her studies.  She later married her first cousin, Dr. William Somerville (son of the uncle at whose home she'd been born), and he encouraged her in her studies.  By this time she was 32 years old.  She accomplished much after this, but one wonders to what heights she would have risen had she been allowed to study from an early age.

She remained mentally active until her death in 1872 at nearly 92 years of age - having commented at age 89 that she was still well able to do the Calculus.

So, finally a portrait of this mathematician - and I should add that her family expressed later that they wished a portrait would have been made of her when she was even younger.  Apparently she was a great beauty, and during her young-adulthood and attending social functions of the day in Edinburgh she was known as "The Rose of Jedburgh."

This portrait is part of a special collection at the National Portrait Gallery regarding the accomplishments of women in the late 18th and early 20th century.  Note the last sentence of the plaque below about the year in which women were finally granted the right to study for degrees at university. 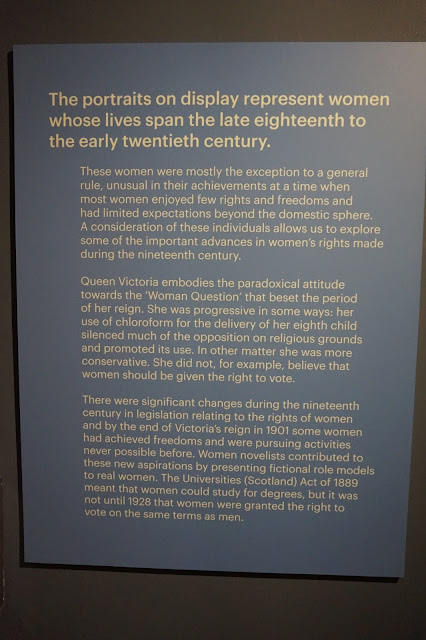 As you can see, I found myself in quite august company!  Queen Victoria is on the far right. 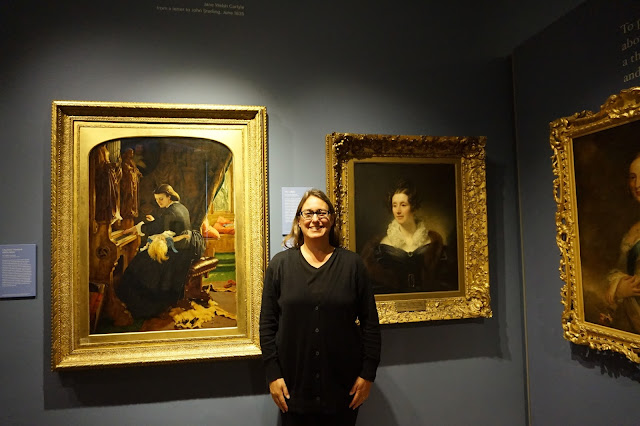