As fall semester 2015 comes to a close and final exams loom my sabbatical is finally beginning to feel like it will be a reality.  It's been a long time in coming!  I began writing my proposal in August 2014, got word it had passed committee in November 2014, and learned in spring 2015 that it had been approved by the board - HURRAY!

My travels, which will begin in March 2016, will take me to Scotland, England, France and Germany to seek out the history of mathematics from renaissance times to the present in northern Europe.  (Given the state of things in the world currently, I certainly hope such travel is still possible four months from now when I am scheduled to go!) 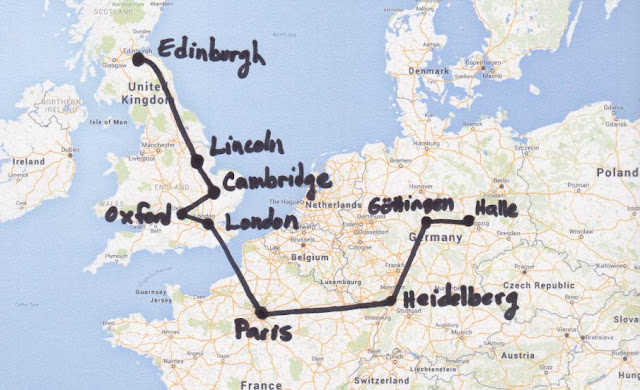 Beginning back in August 2014 and continuing to the present I have been reading, researching, planning and making contacts with European universities.  One year ago today, Thanksgiving Day 2014, I received my first response from a university, Oxford, letting me know of possibilities that are open to me there of touring the Mathematical Institute and of accessing the archives of Queen's College, Oxford, to consult a first edition (1557) of Robert Recorde's Whetstone of Witte in which the equals sign is first developed and in which our familiar symbols for plus and minus appear for the first time in an English text.

Since that first contact I've received favorable responses from many universities, including Heidelberg, Halle, Gottingen, Cambridge and the Sorbonne.  I've also received a great deal of information and encouragement from mathematicians and historians of mathematics with whom I have been in contact, most particularly Professor William Dunham, author of The Mathematical Universe and Journey Through Genius.

This endeavor is a combination of a travel-sabbatical and of an independent-study sabbatical.  Below is a picture of the books I have committed to reading this spring.  The top nine I will read in full.  Of the five compilations on the bottom of the stack I'll be reading about 800 pages. 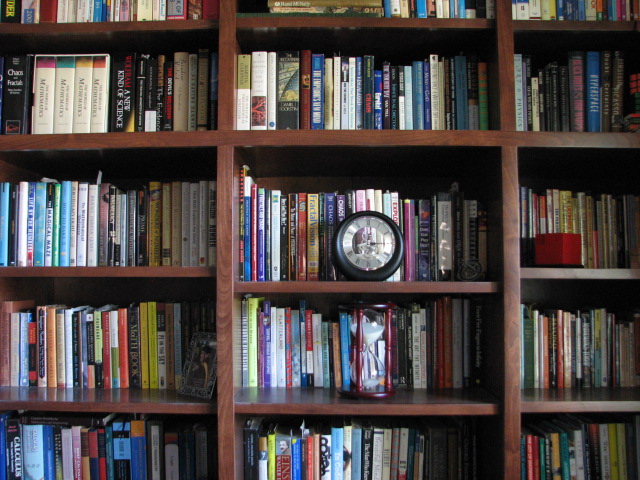 As well as reading and continued travel planning and communications, my spring will consist of laying out talks I will give at Modesto Junior College and CSU Stanislaus in fall 2016 and the beginnings of rewriting curriculum for the liberal arts mathematics classes I teach and looking into ways in which I can incorporate elements from the history of mathematics to bring mathematics more to life for my students in remedial classes as well.  One of my goals is to come back better equipped to help my students and those in our community have a deeper appreciation for the beauty and history of mathematics.