Introduction to Second Sabbatical -- "Sorcerer Mathematicians of the Renaissance"

My first sabbatical was such an amazingly life-changing experience and has so positively impacted my students and my teaching, that it has been my dream to do something similar again.  During fall semester 2018 I worked hard to put together a worthy proposal, and approval was granted!
My previous sabbatical was focused on the history of mathematics from the Renaissance to the present in northern Europe, which was quite a wide sweep of history to try to take in.  This time my focus will be on three 16th-century mathematicians whom I refer to as "The Sorcerer Mathematicians of the Renaissance."  They are Girolamo Cardano (1501-1576), John Dee (1527-1609), and John Napier (1550-1617).


Prior to my first sabbatical I had not heard of John Dee -- embarrassing to admit, but there it is.  Thankfully, while I was in London the Royal College of Physicians was hosting a John Dee exhibit along with a variety of other Dee events. I found myself captivated.  A book on display there linked John Dee with one of my favorite Italian mathematicians, Girolamo Cardano. I later learned that they had met, despite a quarter-century difference in their ages and despite living at such a distance from each other at a time when long-distance travel was onerous, to say the least!  This link was the seed of the idea for this second sabbatical.
Additionally during those first travels I learned more of John Napier -- also a Renaissance-era mathematician with a reputation for dabbling in the dark arts.  How could I resist opportunity to study these three more deeply and in conjunction with each other?  (And if any mathematicians are going to capture the imaginations of my students, wouldn't it be these three?!  Crystal balls, castles, the Spanish Inquisition, codes, feuds, spy-craft, the occult, lost treasure, etc., etc., etc.)
Beginning March 12, 2020, I will be "walking in the footsteps" of these mathematicians as closely as possible.  I will be visiting places where they lived, studied, worked, worshiped, and died.  I will read in library and museum archives, focusing especially on original documents such as diaries and letters.  I will attend any and all talks, tours and events that I can find relating to these mathematicians.

Mathematically I will be studying their work on their terms, as they wrote it and understood it.  The Renaissance Era was as much a rebirth and flowering of mathematics as it was of art, music and literature.  These three mathematicians were deeply involved in this flowering that gave rise to the mathematics (and thus the technology) that we have today.  For example, in 1545 Girolamo Cardano published Ars Magna, or The Great Art, an extremely influential mathematics text that is a basis of our modern algebra.  John Napier created logarithms, an invention that so shortened the time needed for calculations that he is said to have “doubled the life of the astronomer.”  John Dee worked with mathematics relating to navigation and calendar reform and is the first person to have used the term “British Empire,” a phrase he coined in his role as adviser to Queen Elizabeth I.

Though their mathematical contributions are profound, there is much more than mathematics that attracted me to these three.  John Dee may have been a spy for Queen Elizabeth I and is thought to have inspired Ian Fleming’s James Bond character as well as Shakespeare’s Prospero and Marlowe’s Dr. Faustus.  What kind of life must he have lived to have inspired such a diversity of fictional characters?!  Girolamo Cardano was the second most renowned physician of his day and was also a gambler and an astrologer who was imprisoned by the Inquisition for, ostensibly, casting a horoscope of Jesus Christ.  John Napier was an elder in his church, but he was also considered a sorcerer by his neighbors.  That was a very fine line to walk, particularly in the 16th century when people were burned at the stake for witchcraft. Because of his reputation as a sorcerer, he was contracted to use his skills to search for treasure in Scotland’s Fast Castle.

There is a great deal more to what I am doing and exploring, but hopefully that gives a sense of the journey -- enough to tempt you to follow along! 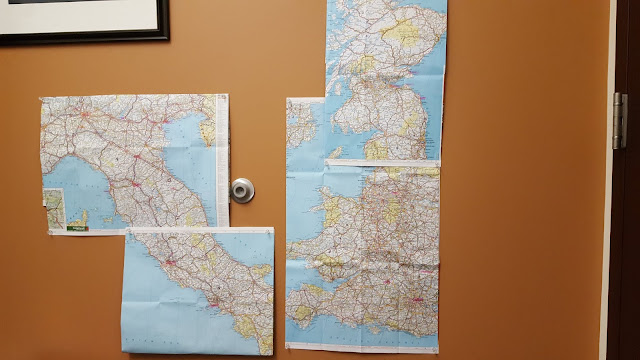 Speaking of the journey, I had these maps up on the wall of my office all last semester in order to encourage and inspire myself.  Never having traveled prior to 2016, I learned in my first sabbatical that I'm a pretty "manic" traveler, don't know how to rest and take down time -- but I also don't necessarily want to rest or take down time because this is my chance to access so much!  I'll be staying in 11 different cities over the course of 8 weeks and will be taking side-trips to other cities as well. 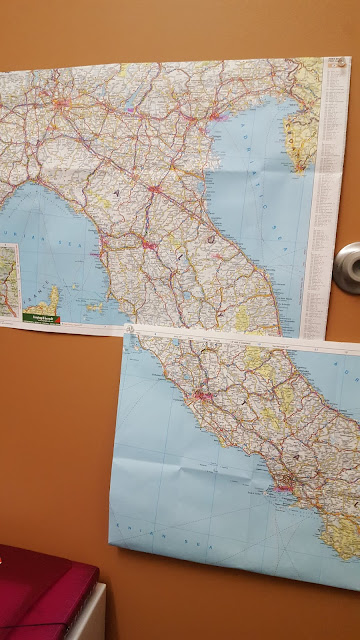 In Italy my focus is mainly Cardano (though while I'm there I'll also look into Tartaglia, Bruno, Fibonacci, Pacioli, Somerville, etc.).  I will be, at the very least, visiting the cities of 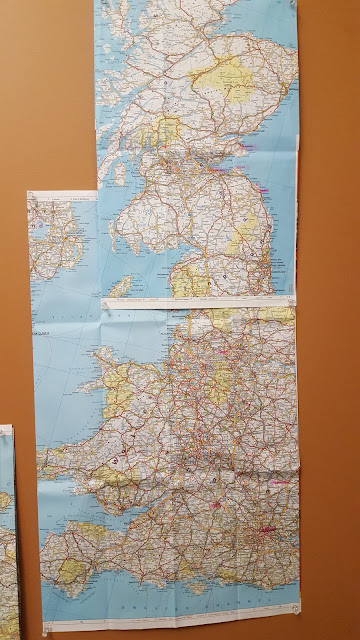 I have been researching this with varying levels of intensity since my last sabbatical, and this research has now shifted into very high gear.  I need to go in with a lot of knowledge in order to get as much out of this as I possibly can.  I plan to begin regular blog posts a few days after landing in Rome on March 12, so watch this space in order to learn about those "Sorcerer Mathematicians of the Renaissance!"


PS  This blog is a continuation from my previous sabbatical, so all the posts from those travels can be found below.

PPS  As of February 25, 2020, word of coronavirus outbreaks in northern Italy may result in significant changes to the above plans.  I fly out (would have flown out) in two weeks.  Now I'm uncertain as to plans  .  .  .