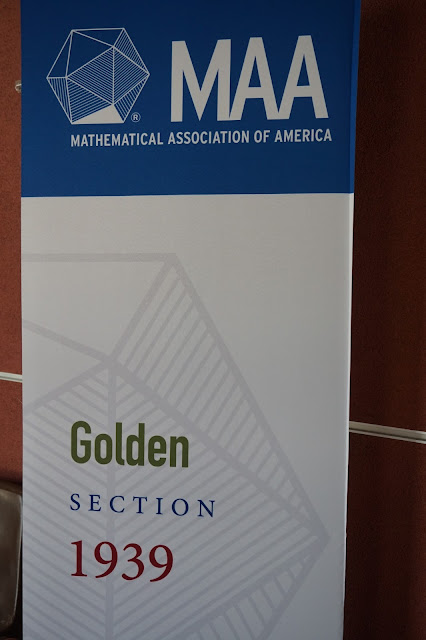 The biggest draw for me was the fact that Persi Diaconis would be speaking at this conference.  He spoke both at the festival and at the conference.  I've known of him and his work for years and was hoping to hear him - and hoping against hope to actually meet him, and I got to! He is a brilliant, world-renowned mathematician, and yet he is so down-to-earth and kind; it was absolutely wonderful talking with him! 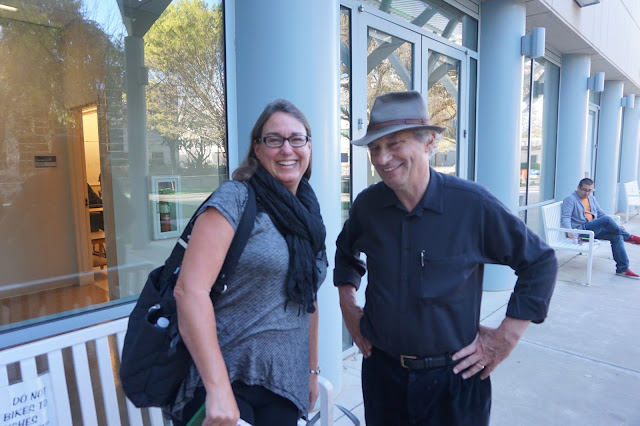 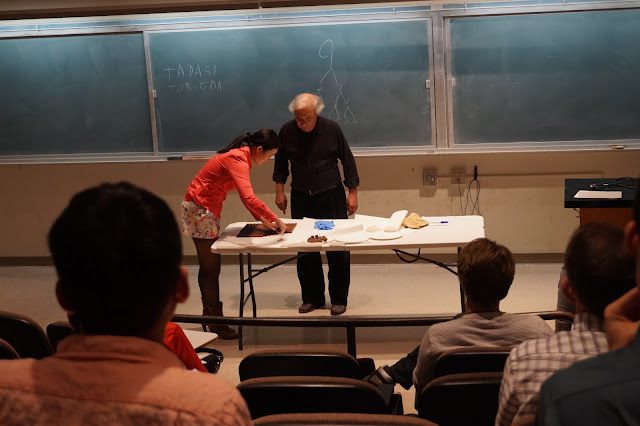 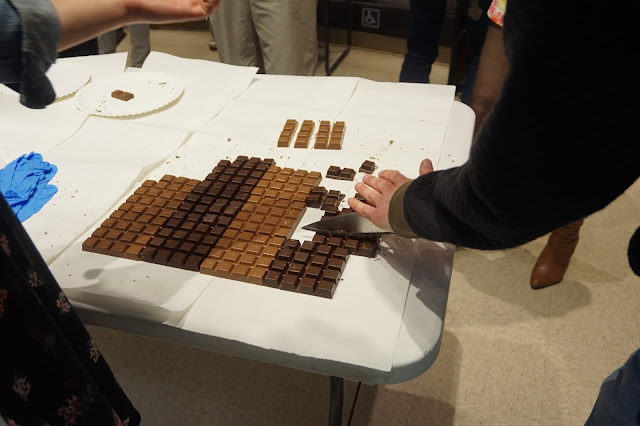 This was my first time on the UC Davis campus.  Given how well-known the campus and the whole city is for biking, I found the decor on student housing to be quite clever and appropriate. 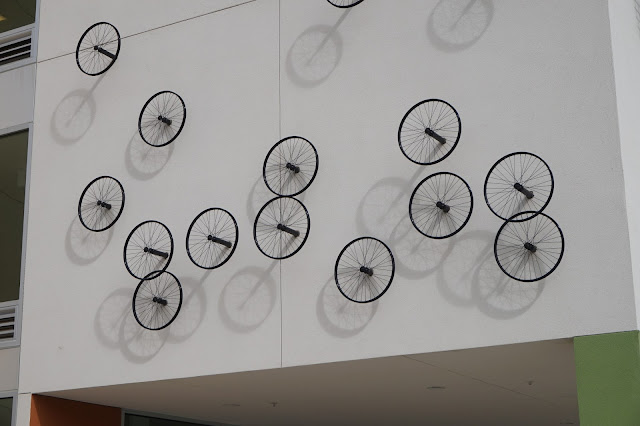 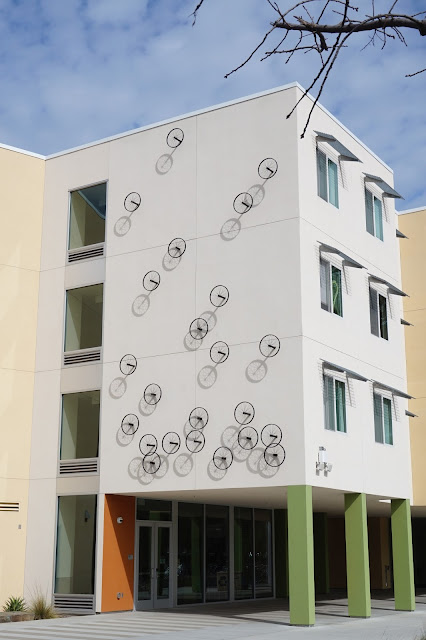 Partway through the second day of talks there was time to enjoy mathematical art. 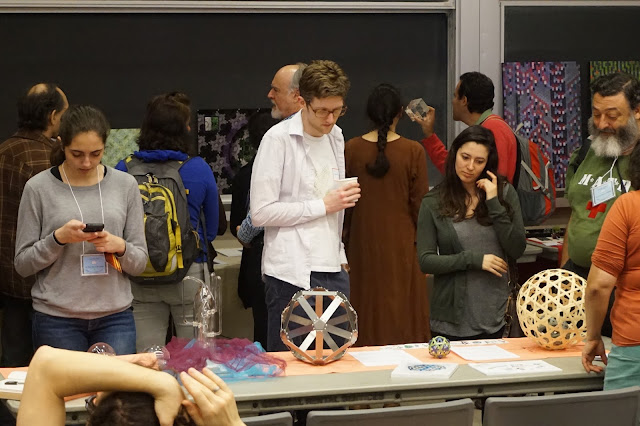 I was drawn to the painting below because it's obviously a Magritte homage - Magritte being my favorite artist.  Once I got near it I overheard the artist, Lidia Luquet, pointing out to another viewer that the apple was partly eaten, and I was immediately brought to the point of tears by the instant connection to the tragic prosecution, persecution and suicide of Alan Turing. 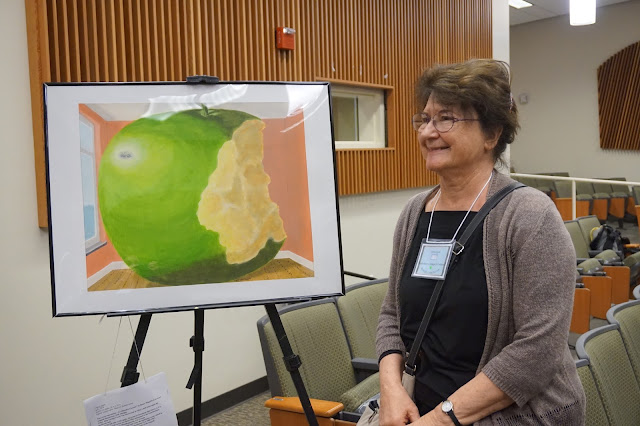 A closer look at the floorboards reveals not wood grain but information about the criminal ammendment (on the books from 1885 to 1967) under which he was prosecuted (Oscar Wilde having been the first person prosecuted under this ammendment).  This was on the right-hand side of the painting, the dark side away from the window.  On the floorboards on the left, in the light, are his mathematical works, including his WWII work on the Enigma Code. 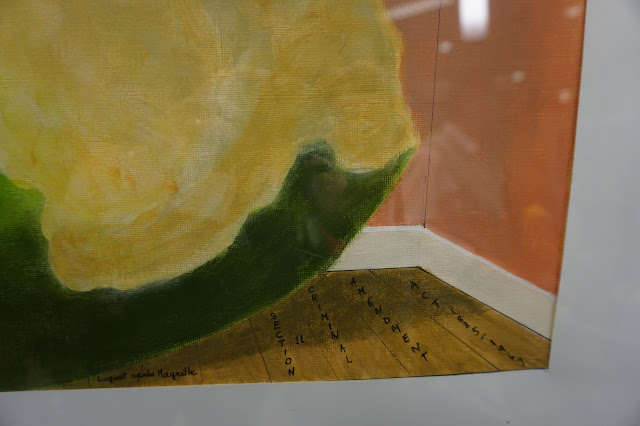 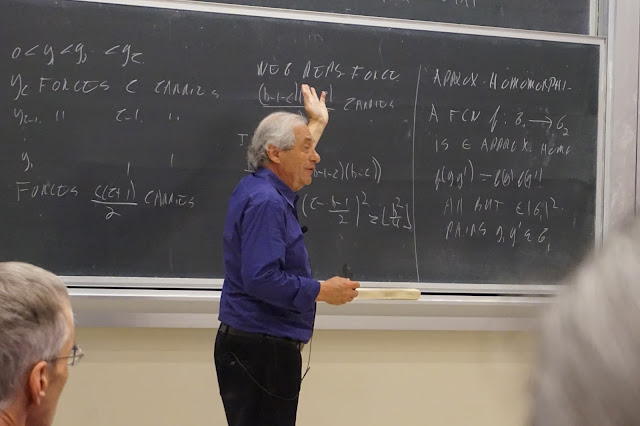 There was a wonderful selection of topics - combinatorics, topology, randomness, analysis, graph theory, group theory, etc.  Here is a sampling: 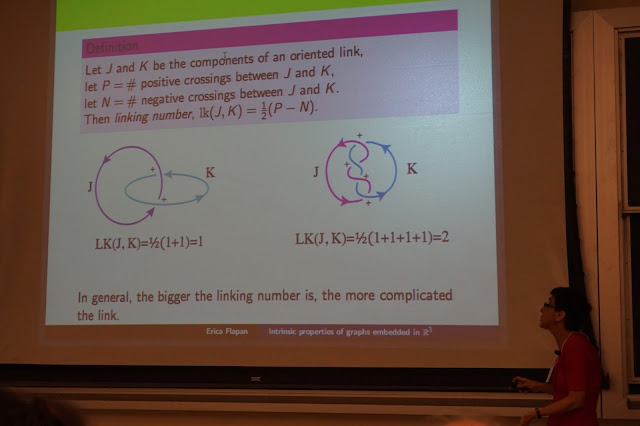 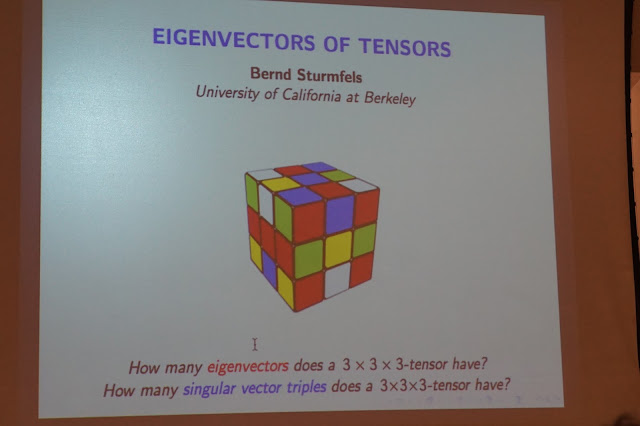 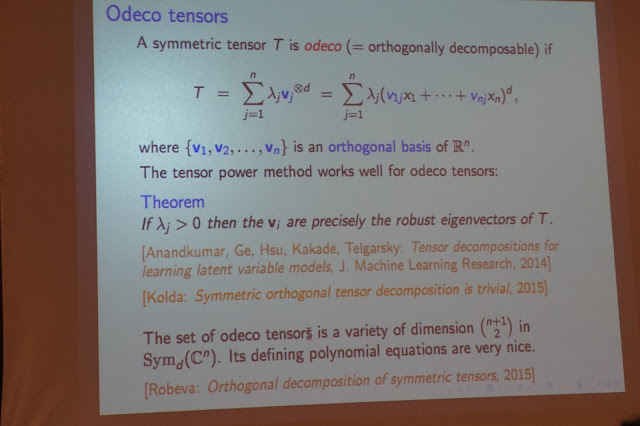 (Bob, the above two slides are for you, since you want to know about tensors!) 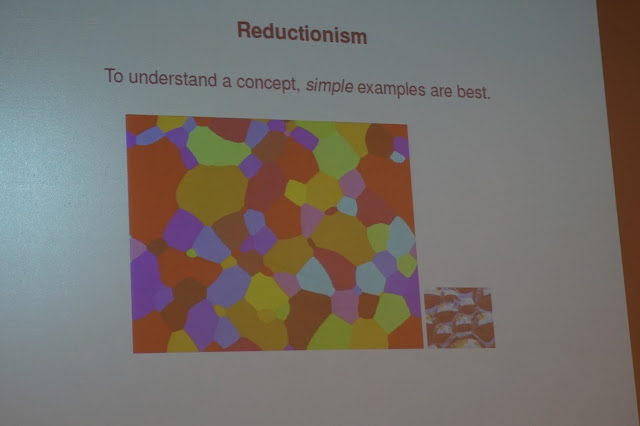 The above is what I'm always telling my students: "Make it Simpler!"  "State and Solve a Simpler Problem!" 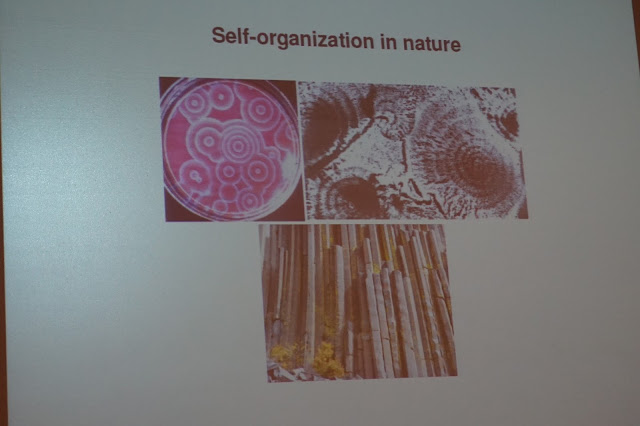 There were lovely applications in the talk that the slide above was from - "Randomness and Order in Random Order" by Janko Gravener of UCD.

My sabbatical is focused on the history of mathematics from the Renaissance to the present, and this was definitely the present!  I learned about many open problems in each of these fields.  The freedom this sabbatical is affording me to read, to research, to attend conferences, to plan for travel, and, eventually, to travel is allowing me to learn so much and to be so inspired.  It was eye-opening to be at the conference having done all the reading I've done recently - especially with regard to the rise of modern algebra - and then to attend such interesting talks involving modern algebra (a topic I hadn't had opportunity to engage in for about 30 years!).  It was also striking to hear names, used in theorems, of people whose lives I have been reading about - Dirichlet, Cauchy, Hilbert, etc.  Their names are used as if they are still here - a colleague just down the hall.  "This is Dirichlet."  "This is, of course, Cauchy-Schwarz." "This part is Hilbert."  They absolutely live on in their work.