A significant part of my sabbatical is to walk - quite literally - where the famous mathematicians of the past walked, and I am certain that Sonya Kovalevsky (1850-1891) walked in the woods above.  This is on a path just off of Philosopher's Way.  It's an area in Heidelberg, just across the river from what's now called "Old Town," that began to be cultivated with vineyards in Roman times.  In the early 19th century  poets would walk through the vineyards, and between 1837 and 1841 the paths that are here today began to be laid out.  Sonya came to the university here in 1869. 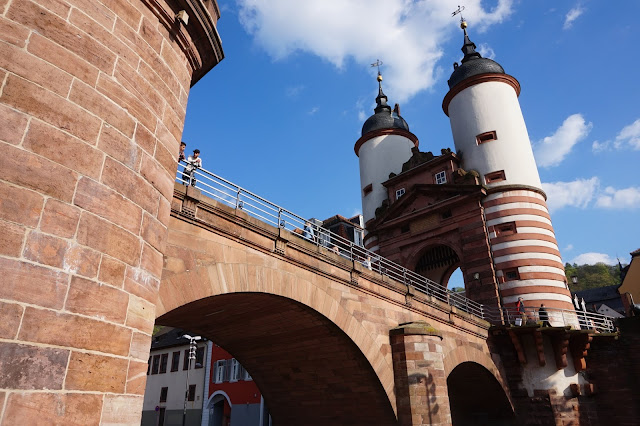 Above is the Alte Brucke, or old bridge, which was built in 1788.  She would have been familiar with it and with its gate, a very recognizable landmark in Heidelberg that has been there since the middle ages. 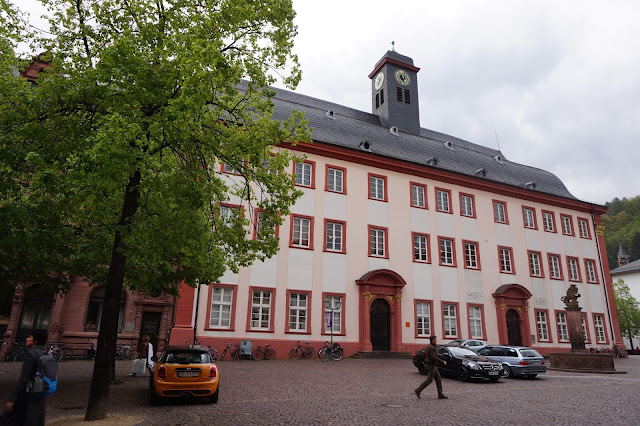 Above is the oldest building in the university - built in 1712.  The university itself was founded in 1386, but Heidelberg has been hit hard by war over the centuries, particularly the Thirty Years' War, so not many of the current buildings date much before that even though "modern Heidelberg" dates back to the fifth century AD. 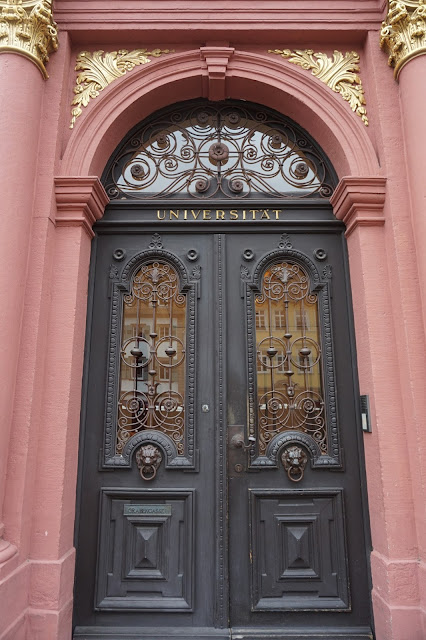 As was the case for Mary Somerville and Sophie Germain, both of whom I've already posted about, it was nearly impossible for Sonya to become a mathematician because she was a woman.  She was born in Russia where it was certainly impossible for her to study mathematics.  Heidelberg University in Germany also would not allow a woman to take classes, but it would allow a woman to audit classes if the professor gave his permission.

Over her parents' objections Sonya (also known as Sofia Kovalevskaya) entered a marriage of convenience - nominal and platonic (initially) - for the sole purpose of gaining the ability to travel, something single women could not do.  Her husband Vladimir was a student of paleontology and was quite amenable to the plans.  At least three Heidelberg professors were open to having her audit their courses: Hermann von Helmholtz, Gustav Kirchhof, and Robert Bunsen. 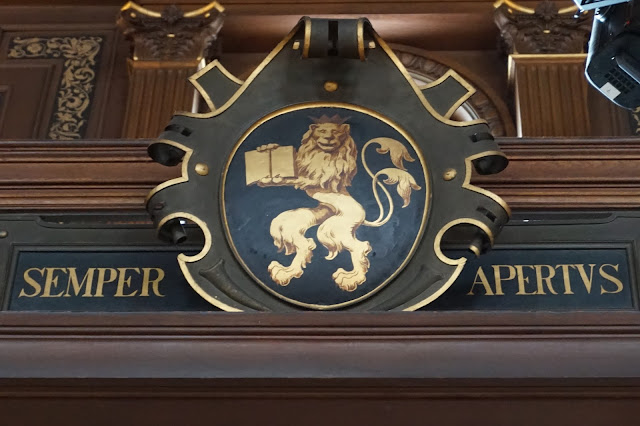 The motto of Heidelberg University is "Semper Apertus," or "Always Open" - meaning that the book of learning is always open and that our minds should be always open - open through curiosity, open to new ideas both inside and outside the classroom.  This must have suited Sonya well.  In saying that I'm thinking of a story from her childhood.  it was her uncle Petr that first shared mathematical concepts beyond elementary arithmetic and geometry with her.  Though Uncle Petr was not a trained mathematician, he had a great deal of respect for that branch of learning, and he shared enthusiastically with her.  Of this experience she writes:

"It was from him, for example, that I heard for the first time about squaring the circle, about the asymptote, toward which a curve approaches constantly without ever reaching it  .  .  .  .  The meaning of these concepts I naturally could not yet grasp, but they acted on my imagination, instilling in me a reverence for mathematics as an exalted and mysterious science which opens up to its initiates a new world of wonders  .  .  ."
Another experience of mathematics in childhood happened when her family moved to Palibino when she was 11 years old.  Her parents were intent on redecorating the house from top to bottom, but they had not ordered quite enough wallpaper, so her bedroom was papered with lithographed notes on differential and integral calculus from her father's days as a student.  Here too she was "apertus."  She writes:

"I remember how I spent whole hours of my childhood in front of that mysterious wall, trying to make out a single sentence and find the order in which the pages ought to have followed one another.  From long daily contemplation of them, the appearance of many of the formulas burned itself into my memory, and the text itself left a deep imprint in my brain, although at the time I was studying it I could not understand it at all."

"[Sofia] desperately wanted to understand what was written on the wall and consquently was disappointed in her first arithmetic lessons, which did not help her to understand [the] symbols  .  .  .  .  [Sofia] soon convinced herself that in order to get to the point where she could read her wall, she would first have to learn boring things like division and multiplication"
Sonya did have some instruction in mathematics from a tutor at home in her younger days, more than a young girl would normally have been exposed to. Her attraction to mathematics became so intense that she started to neglect her other studies.  That's when her father decided to put an end to her mathematical education.  But, as with Mary and Sophie before her, she secretly read about mathematics in her bedroom at night.

Eventually her path did take her to university, and though she could audit courses, she could not earn a degree.  After two years in Heidelberg, she moved to Berlin to study under Karl Weierstrass, but in Berlin she was not even allowed to audit courses!  This ended up working to her advantage, though, as Weierstrass took her under his wing and tutored her privately.  By 1874 she had completed three papers, each one of which Weierstrass considered worthy of a doctorate - yet she could not earn such a thing at the University of Berlin, no matter how worthy her work was, simply because she was a woman.
Amazingly, though she had never take a course or any exams there, it was arranged that she could earn her doctorate through Gottingen University in 1874.  Her degree was granted summa cum laude.  Yet despite this and despite letters of strong recommendation from Weierstrass (a very well-respected mathematician) she could not obtain an academic position.  Eventually her friend Gosta Mittag-Leffler was able to get permission granted for her to lecture in Stockholm (1884); he had to raise personal funds in order to support her, as she was not paid by the university or government.  Five years after she began lecturing he was able to secure a tenured position for her.

Throughout her life Sonya had connections with circles of learned people.  Both she and her sister Anna were gifted with literary talents, and her sister had a short story published in a magazine edited by Dostoevski when she was still a teen.  This began for them a close friendship with an elite group of European intellectuals in Moscow.

There is so much more I could write about Sonya - more on her family life - details of her mathematical work - her tragic, early death, but at this point I should probably just recommend the biography by Ann Koblitz: A Convergence of Lives: Sofia Kovalevskaia - Scientist, Writer, Revolutionary (Lives of Women in Science).  Below are pictures of the graves of some of her personal connections in London - the writer George Eliot (Mary Ann Evans) and also Karl Marx, both buried in Highgate Cemetery, London. 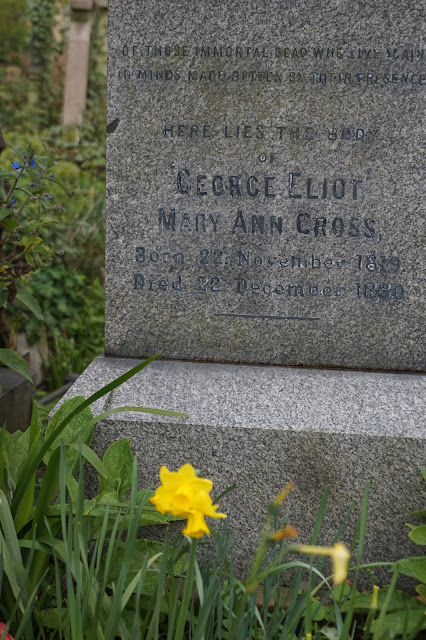 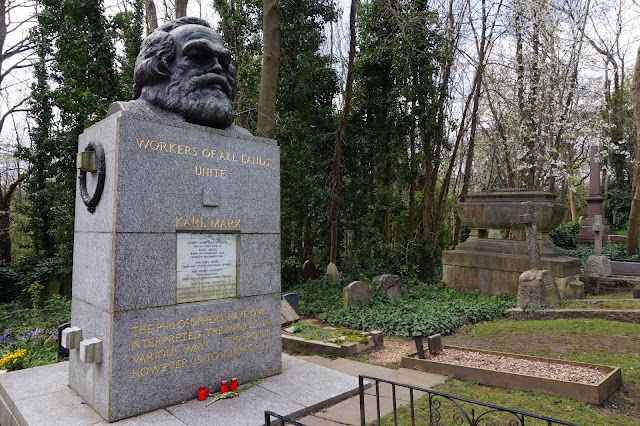